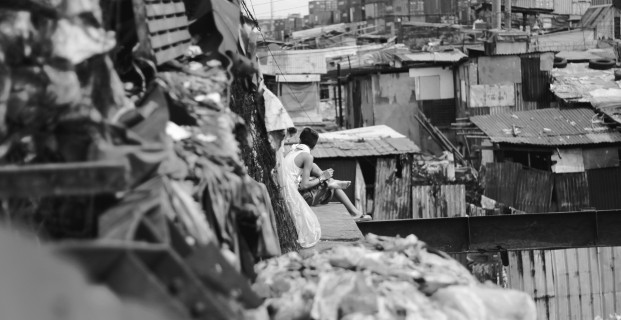 The Philippines, who would have guessed. It is so different from the things we are used to. Together with the team we connected to Mark Pedder (his wife Christine is back in Australia for the moment). Mark and Christine live for 13 years in the slums of Baseco. Slums are the poor parts of the city. Baseco is a city which is built on garbage. All small houses next to each other with mini ‘streets’ which form a path in between. You can notice on the atmosphere they are working here for a long time. The stories from the time when they first arrived are very different to the ones now.

If you go a little further you come in the worst part. The ground floor is 100% filled with garbage. So when you look, you are looking at the second floor. Some people live in complete darkness, humidity and no fresh air. It is impossible to capture. Outside are people searching in the remains of food and other stuff in the hope they are able to find something valuable. Most of them are just walking around, without a purpose for their life.

Giving money or food to these people is almost impossible. If you would bring them food (read: fish) every day it would only make them depend on you. Learning someone how to fish, that is what will get them started. Mark and Christine are bringing life in these lives by talking about Jesus. Telling them that there is hope, that there is someone who looks to them and loves them. That they can change their life and ways. When someone gets to realise and understand this they will right away start praying for other people. That way Mark hopes they will start a small fire which will affect those that are around them. That it will be themselves who need to bring change in the big mess. The problem is that the people do not think about the consequences of their actions. They do not understand that it is because they throw away everything on the floor that they are living on this pile of garbage. They do not see that they are the cause of the problem. That’s why change needs to happen in the root so that the further generations can benefit from it all.

We have had the opportunity to show Jesus’ love in many different ways. He died and rose again and conquered death. All what is dark, pain and negativity he destroyed, He conquered so that we can be free. We do not have to carry the pain and the sorrow by ourself, but are supported by an everlasting joy that comes from Him. It is too beautiful for words. And I’m happy that I can be a part of the spreading of this certainty!

This site uses Akismet to reduce spam. Learn how your comment data is processed.

I have a heart for all that involves music and worship. God is my passion, He is the inspiration for the things I do. I hope to develop this more together with Rein in this year at IABC in Denmark.